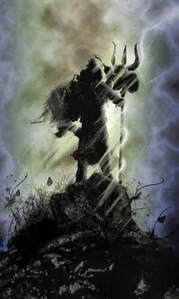 Haunted houses happen all year round, but Halloween is the time of year the spirits are most active. It has been considered for many centuries as one of the most magical nights of the year. A night of power, when the veil that separates our world from the spiritual world is at its thinnest.

Halloween is celebrated each year on October 31. It is a mix of ancient Celtic, Roman, Catholic, European and other traditions that blended together over time to create this holiday. The true origin of Halloween is a ceremony of honoring our ancestors and the day of the dead. Halloween has long been thought of as a day when spirits can return to the earth as the boundary between the worlds of the living and the dead becomes blurred.
Many cultures have ceremonies to honor their ancestors. They could cross the veils and return to the land of the living to celebrate with their family. They were honored and invited home while harmful spirits were warded off. It is believed that the need to ward off harmful spirits led to the wearing of costumes and masks. Their purpose was to disguise oneself as a harmful spirit and thus avoid harm. This ceremony would complete a cycle of birth and death, and keep in line with the harmony and order of the universe. Halloween is when we enter into the cycle of darkness for the upcoming year.

Beware, as the veil begins to shift on October 13th. There are many spirits who were confused at the time of death and are still lost between worlds. Oftentimes a lit candle is their only hope to find their way home. So light your candles and send blessings of love and gratitude, and this will help the lost spirits find their way back to their heavenly home by Halloween. As you do this, it will free you of their lost and confused feeling.

Many children are being born with psychic abilities, more than ever before, and having to learn how to handle the difficulties of sensing or seeing spirits roaming about. If you or your child suffers from nightmares and fears sleeping in certain rooms of the house, but nobody else experiences this, then it is the person who is haunted; not the home.

Houses can become haunted when the person who died was attached to the place and still wishes to remain there after death. The history of traumatic events holds fragmented spirits stuck in the space. Land will hold the history within it called an imprint. These imprints are strong, energetic patterns than can come from battles and Indian burial grounds.

If you feel you or your home is haunted, you can contact a shaman to help clear it. This is called a house cleansing or space clearing. A shaman has the most powerful way of doing this by using Sacred Geometry, which is a mathematical code found in all life forms, also known as the universal language of light. This connects with Nature to create a sacred space in the environment, which crosses the spirits over and restores the blueprint of the land.  Space Clearing brings your space into peace, balance and harmony.